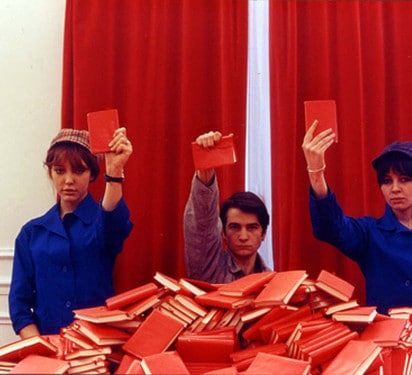 LA CHINOISE
Dir. Jean-Luc Godard, 1967
Face of the french new wave, Jean-Pierre Leaud stars in this stylish and dark political comedy from Jean-Luc Godard. In 1967's Paris, a group of young students disillusioned by their suburban lifestyle find themselves enamoured by the teachings of Maoism and vow to make change. Forming a small terrorist cell over the summer as they are locked away in their parents’ bourgeoisie apartment, they plan on inspiring change through any means necessary, even resorting to violence.

With the election next week, MUBI is collaborating with Second Home to curate a season which focuses on youth and revolt, raising awareness of politics and the importance of having a voice.

Screenings start at 7.30pm, admission costs £7 on the door and is free for Second Home members.

Election – Tuesday 5th May
This Is England – Monday 11th May
Punishment Park – Tuesday 26th May
The Anabasix of May & Fusako Shigenobu, Masao AdachiI, & 27 Years Without Images – Monday 1st June
Followed by a Q&A with director Eric Baudelaire